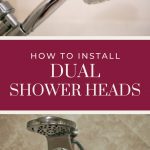 His and her shower heads are a very popular way to update your master bath shower. They allow for couples to shower together without one person standing under the hot water while the other is freezing. By following this guide, you can learn how to add a second shower head to your existing shower.

There are a few questions you should ask yourself and your partner before you take on this ​intermediate DIY task​​​. That way you know what options you have and how simple or tough this task can be.

Technically speaking, you first should decide which type of second shower head you want. There are two different ways to go with this decision:

A dual shower head will be quicker and easier to install, but probably not quite as nice as the second unit. There is no wrong way to go, just make sure you choose before starting the project!

Dual Heads On One Valve

​You can have both shower heads tuned to the same valves. This means you set one temperature you both agree on. The water will also be split between the two shower heads. You may need to look into some options below regarding water pressure.

Skip the reading if you want – our preferred dual showerhead is the AquaStorm by HotelSpa. It has very high pressure to both heads and features 30 various settings!

If you can agree on the same temperature in the mornings, a single shower valve would be okay for both. If you’re in the market for a new showerhead, we’ve put together a review of the best ​dual shower heads on the market.

This is also a good option if you’re adding a showerhead to a bathtub.

Having control over your own shower head allows you to have it warmer or cooler than your partner prefers. The downside to this option is that unless you know a good amount about installing plumbing lines, you will want to hire a professional.

If you’re looking to go the easier way of the DIY dual shower head, opt for the simpler option. This way you can update your shower without having to hire a professional to cut through your tile to add in a second water line valve, additional pipes, and a new shower head hookup.

​What Type of Dual Shower Head?

​Are you looking for two shower heads that come out from opposite walls? Would you like to have an overhead rainfall shower head with a moveable handheld that is on a wall close by? 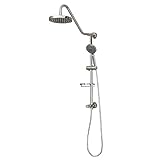 There are many different options you can chose from depending on what will fit you and your partner best. Take the time to see which shower heads will maximize your morning or evening routine and help keep the shower a relaxing place.

​When it comes to having two shower heads working at the same time, you can easily run into a reduction in your water pressure. This will depend on a few different factors that you’ll need to consider.  ​

​How to Install Dual Shower Heads

​In this guide, a dual shower head is referring to two shower heads connected at the same pipe connector. This can mean a head plus handheld combo like the ​Ana Bath Shower Head combo which allows you to use one or both at the same time.

All the dual shower heads have a built-in valve that lets you control whether you just use one shower head at the time or turn both on as needed.

​How to Install Two Shower Heads In Your Shower

​This sounds similar to installing a dual shower head, but its actually different. When you install two shower heads, you end up having multiple “units”.

​This gives you the ability to select the best shower unit for rain effect to mount above you, and a second mobile wand shower head ​to use as a handheld option.

You won’t need to cut into the ceiling or spend more money for a plumber to come out and install it for you.

You will also want to install a shower wand holder onto your shower wall so the shower wand has a docking place that does not interfere with the rainfall shower.

While the thought of drilling into your tile may seem too big of a task, it is really simple with the right tools. It also gives you a better hold than a suction cup holder will. 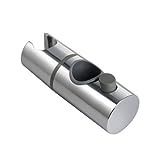 If you want a less invasive holder, you can find good suction cup holders. The suction cup versions should last for a few months before showing signs of decline like slipping or coming off.

Re-wet the back and reapply the suction cup to the center of a tile. Make sure it is not too close to the edge. The tile will concave in around the grout seams, making the suction strength less effective.

How to Add a Second Shower Head

​Figuring out how to plumb a shower with multiple heads and valves is a more involved DIY project, but it can be done without a professional.

Due to the behind the wall invasive steps, you will want to at least consult a professional at your local home store before you make the final decision.

The steps include adding a second water line, rerouting pipes, and fitting a new male pipe for the second shower head to come out of. If you are trying to add it to an already finished shower, it can be a more complicated task.

​This would be better done to a new shower that has not been completed or a gutted shower that is being redone.

Now that you know how to add a second shower head you can update your shower to better accommodate two.