You are upgrading your shower with a shiny new shower head, but then you look up to see the shower arm is discolored or rusty. It’s simple to learn how to install a shower arm so you can update all the hardware at once.

​What is a Shower Arm?

A shower arm is the small pipe that connects the main water supply behind the wall to your shower head. This very important part of your shower dictates how far and what angle the water will come out of your shower head. It can come in many shapes, sizes, and finishes. Some models can be adjusted to fit the height of the person showering at the time.

​​A standard shower arm is about a foot long and has a 45-degree angle bend in the middle. This brings the pipe straight out of the wall and then angles down so the shower head is given a more direct downward path you can adjust.

This type of shower arm is the most common and works well. However, it is not an ideal fit for a taller person.

​​If you are too tall for your current shower and find yourself ducking, it may be time to find a shower arm that elevates your shower head. This would give you a more relaxing shower that doesn’t make you duck to rinse off.

These shower arms either angle up and out in an S curve. Or, they can be a vertical bar that comes out of the opening. These go up in a 90-degree angle perpendicular with the wall before branching out and pointing downward.

Some of these shower arms allow you to adjust the long vertical pipe to stand straight up. Or, you can lean it forward to bring it higher or lower depending on the height of the person using it. S curve shower arms do not offer an additional height or angling.

​​The primary shower arm fixture for a rain head shower is one that angles straight down over the shower instead of at an angle. Some adjustable shower arms can accommodate a rain shower head.

For the full experience, you will want to invest in the right type of shower arm that will hang away from the wall​. This will hold your shower head straight down​, getting the best effect out of the high pressure rain shower head.

Now that you know some of the basic models and what they are made for, you can choose the best shower arm for you. While some of these models can overlap, make sure you find the right fit for your height and shower head model.

If you are unsure about the best type of shower head and arm for your needs, you can always consult a DIY specialist in your home improvement store for more tips on the right shower arm.

​How to Remove a Shower Arm that is Intact

Removing your old shower arm is a pretty simple and straightforward task. Just like removing your shower head, the manufacturers want to make it easy on you to remove and replace. Be wary that there is always the risk that you run into a complication or two once you start, though.

Without a shower head on, water can come out of the pipes full force. This could be damaging if you have removed the shower arm, because water could then get into your walls. Save yourself a potential headache and just go ahead and turn off the water.

Once the water is off, follow these steps to remove your shower arm.

​Grip the shower arm with pliers while using a wrench on the shower head. There should be a connecting nut the wrench can be tightened on.

​Keep the pliers gripped on the shower arm and begin to turn it counterclockwise.

​Now that the shower arm has been removed, you can skip down to either cleaning and restoring it or installing a shower head pipe and shower arm.

How to Remove a​ Broken Shower Head Pipe​

​​Whether you are trying to remove your shower arm or if you are merely adjusting a crooked angle, a worn-down shower arm can sometimes deteriorate and break off. If this happens, stop everything and turn off the shower water. Then go turn off the water supply.

You want to limit any water spewing out since most of these breaks happen in or around the connective threading in the wall.

Even though a broken shower arm in the wall sounds like it needs an expert’s touch, this fix is pretty simple. It can be done at home with the right non-expensive tools on hand.

​The first thing you are going to want to do after the water is off will be to shine a flashlight into the hole to assess where the break occurred. Make sure you move the metal disc covering so you can see clearly in the wall.

If the shower arm pipe broke off before the threaded area, you can use the pliers to turn and remove the piece out of the female pipe fitting that is in the wall.

Normally, when deteriorating breaks like this happen, the shower arm pipe will break within the threads of the wall pipe. This can make it seem like an impossible task. But, with the tools listed above you can get it out and get ready to replace it with a new shower arm.

Make sure you purchased a tapered no. 10 flat file. All these elements are important in the file to ensure this DIY repair trick​ works. Go ahead and put on the protective eyewear to keep any debris from flying out of the workspace and around your eyes.

The small metal grooves will grip into the broken thread and hold onto it. Once you have hammered the file in, you can remove your glasses and swap out the hammer for pliers.

If you notice the file is just grinding around in circles and the thread is not unscrewing, use the hammer to tap it in a few more times until it has a tight fit that doesn’t wiggle.

Continue to rotate the file until the broken piece is free and out of the wall pipe.

A broken shower arm can really throw a monkey wrench into your easy DIY project when you are learning how to install a shower arm. Thankfully, there is an easy solution to get you back on track.

Now that the broken shower arm pipe is out, you can clean up the shower area. ​ Use a damp rag to reach in there and wipe away any debris that was left over around the thread. Pull off any leftover pieces of plumber’s tape so it is ready for the new shower arm to be installed.

​How to Clean a Shower Arm

​If your current shower arm is still in good condition but is discolored due to rust or soap scum, you can opt to clean it before you go out and purchase a new shower arm.

There are a few different cleaners you can pick from that are great options for cleaning your bathroom and removing rust​.

​When it comes to choosing a natural cleaner to restore metal and clean away any rust one of the best products is white vinegar. This is because of the high acidity content found in vinegar and its ability to eat away and remove rust.

If you are cleaning a surface area, vinegar and baking soda combined is a powerful cleaner.

For a shower arm, most models are small enough for you to be able to soak it in a rust removing bath overnight. Fill a bowl with pure white vinegar and sprinkle a good amount of salt into the vinegar bath.

Vinegar alone is a great rust fighter. However, the salt is an acidity booster to make the vinegar much more effective at getting rid of the rust. It’s acidic properties can also dissolve stains and clean carpet, walls, floors, and other household items.

The baking soda will neutralize the acid on the shower arm. It will also react with any vinegar that has soaked into the rust. It will combine with it to form a reaction which will loosen and break apart any rust spots where vinegar soaked into it.

After 10 minutes of soaking, you can rinse the shower arm and begin scrubbing it with a strong brush or steel wool. This should remove most of the rust. If you are encountering any stubborn spots you can re-soak the shower arm in the vinegar bath for anywhere from 12 hours to 3 days depending on how bad the rust is.

​You can use these same tactics to clean other stubborn areas in your bathroom, like the shower floor and pan or around your toilet​.

​Keeping your shower arm, doors, and drain clean will help to extend their life as well, so you’re not having to replace them as often.

​​​There are a few super effective chemical cleaners on the market you can use to soak and clean rust off of a shower arm.

One of the most popular options is Calcium Lime Rust Remover (CLR) because it is a super-fast acting and very effective rust remover. 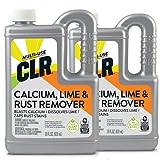 Due to the fast-acting qualities and high potency of this chemical, it is suggested you wear gloves when handling it. Safety glasses should also be used to keep any harmful fumes from irritating your eyes.

Another great chemical cleaner is the Bull Frog Rust Remover Liquid Spray. This thicker ​solution is great for items that are too large to be left soaking in a small tub or bowl.

To use the Bull Frog spray, coat the rusted area and let it sit for twenty minutes. This spray has a similar thickness to honey. It will cling to the adhered area with little to no runoff. 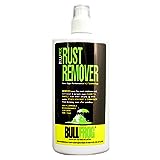 Use a wet clean cloth to wipe the spray away after it has set the allotted amount of time.

Whether you opt for chemical or a natural cleaner, the important thing is to remove any and all traces of rust, so it does not begin to build up again as easily. When your shower arm is clean, you can finish learning how to change a shower arm.

How to Install a Shower Arm

​You have completed all the above steps from removing to cleaning. Now it is time to install the previous or a new shower arm. To complete this final step, you will need to have:

​Now that you know how to install a shower arm, you can clean and upgrade all the showers in your home. This easy DIY task can be done in a short time and you can refresh and update all your bathrooms without having to hire anyone to do it for you.