The first time we saw a rain shower head, we thought there must have been a mistake. We were staying at a fancy hotel, and walking into the shower, it looked like someone had accidentally stuck the shower arm into the ceiling by accident, resulting in a showerhead that came down from the roof instead of the wall.

However, it didn’t take long in the shower to realize that this was clearly by design.

And what we have come to realize is that a rain shower head is a little slice of heaven, and quite simple for you to install in your own home.

If you’re in the middle of the rain shower head vs regular shower head debate, then we know right where you are.

Here’s our take on the topic:

If you’re already convinced you want to add a little bit of luxury to your bathroom, here's our favorite model 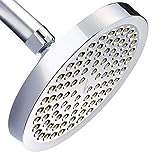 It’s a fair debate, and one that you should consider. Some of the questions we had are probably the same that you’re having.

We’ll walk you through the advantages and disadvantages of the rain shower unit and how it differs from a regular one.

We’ll also give you some things to consider as you decide what to do so you can have the best option for your spa shower experience.

What is a Rain Shower Head?

The rain shower head was designed to give you the feeling of showering in the rain. While that might seem a little odd (who runs outside in the rain to take a shower??), it has quite an alluring feel to it.

And while no one actually showers in the rain, a rainy day does bring a lot of amazing feelings and emotions with it.Whether a gentle spring sprinkle or a heavy summer thunderstorm, rain is one of nature’s most tranquil and peaceful happenings.

Imagine being able to bottle all of that up into an experience that you could have on a daily basis.In a nutshell, that is what a rainwater shower head does. It provides a rain-like showering experience, which many find to be incredibly relaxing and rejuvenating.

Typically these showering heads are not very high in pressure – to some degree, that defeats their primary purpose of relaxing you. However, there are a variety of shower heads in the rain classification that have adjustable pressure settings.

There are several key factors that distinguish a rain shower head vs a regular shower head.

Most people install a rain shower head for its relaxing qualities. The feeling of water completely surrounding you, falling over top of your head and running down your body, can be incredibly relaxing and refreshing.

On the other hand, a rain style shower head is not nearly as functional as a regular head.  Normal shower heads typically come with a variety of settings to allow you to take care of your cleaning business as quickly and effectively as possible.

Even when you opt for a high quality handheld shower head, you’re still putting function over form for your showering experience. A rain shower system will bring a touch of luxury and sophistication to your bathroom that a regular head just won’t.

There are a lot of factors to consider when looking at the installation process of a rain shower head.

If following the traditional method of putting the rain style shower head in the ceiling, then you will need to get water piping into the area so you can install the rain shower arm. Odds are very low that you’ll have pre-existing water pipes in the ceiling above your shower.

You can either do this work yourself, or hire a professional, but it does have some complications. A lot of people install a rain shower unit as a second shower head when they are already remodeling their bathroom, or replacing their shower area.

You can also opt for a rain head unit that installs into the wall, instead of the ceiling. These are becoming more popular and don’t require much, if any, additional work.

Usually rain water heads don’t have the greatest of water pressure. So, if you prefer strong showerheads that put off a ton of pressure, then a traditional rain showerhead won’t be a great move for you.

They do make high pressure rain shower heads, which can make a great option for you in that case. You’ll have the best of both worlds – relaxation and high pressure.

How to Pick Between a Rain vs Regular Shower Head

Choosing is always tough, but here are a few factors to consider as you weigh out the options in a normal shower head vs a rain shower head:

Consider Both Types of Shower Heads

Just the same as you can have both a handheld shower head and a regular shower head, you can combine both rain and normal units. This will allow you to switch between depending on your preference or need in the moment.

Remember that you can actually have the best of both worlds, which is what many prefer. And, if you don’t want to do the dirty work of ripping apart your bathroom to install a pipe in the ceiling, you can opt for a wall mounted version.