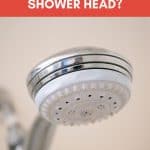 You are seeing black stuff on your shower head again and this time you are convinced that mold and mildew are not the culprits. It is something else and not just a matter of humidity and moisture. That brings the question, what is the black stuff on my shower head?

What Is the Black Stuff on My Shower Head?

Iron is another metal in water that leaves stains in your plumbing fixtures. This time though, the stain could be red, orange, or brown, depending on the oxidation level. In general, the presence of iron-eating bacteria in the water is also not harmful to your health.

Manganese and Bacteria Effects on Your Health

Manganese is present in water and not only in the foods we eat. This is an essential mineral that has a specific function in the body. However, having manganese at a level exceeding 0.05 parts in a million in your drinking water can be fatal.

Knowing that a specific type of bacteria uses oxidized manganese to fuel themselves up and multiply, the question becomes: is the water still safe with their presence?

Yes, the water is still safe despite the small presence of oxidized manganese and bacteria. There is no evidence showing the harmful effects of such contamination.

Most advice online would tell you that the most common causes for black stuff in faucets and showerheads are mold and mildew. This is perhaps because not many people until now know the existence of manganese-related bacteria.

Scientists have been suspecting the presence of manganese bacteria for more than a hundred years already. However, they were able to discover them just recently. In fact, studies about it are still being published until a few months ago.

Iron is another naturally-occurring mineral that is present in water. Oxidized iron and the bacteria that thrive in it, on the other hand, causes red stains in water and plumbing fixtures.

Like manganese, iron in small amounts does not make the water dangerous to health. There is also no evidence of any harmful health effects of iron bacteria.

How Does Manganese and Iron Develop Black Stains and Buildup?

Iron and manganese are one of the most common elements found on earth. In their most preserved form, they are transparent, colorless, and water-soluble. However, they change in color when exposed to oxygen. Then, they become less soluble.

Going further, these bacteria feed on oxidized manganese and iron. As they borrow electrons from them, the reaction creates the black or red residue.

As the process continues and with the bacteria thriving uninterruptedly, a buildup of gunk develops. When left unmanaged, this would cause clogging in plumbing fixtures and reduced water pressure.

How Can You Test for Manganese and Iron in Water?

When you have high levels of manganese and iron in your water like the water quality they have in places like Nebraska, your chances for having black gunk and red stains are higher. Ignore this and you are likely to deal with the same problem over and over.

Also, it is not just the black stuff that you should be worried about. As we’ve mentioned earlier, high levels of manganese in the water is fatal.

Unlike manganese though, you can easily detect iron on your own by the smell of and/or the presence of tiny, yellow, or orange particles in the water. You can run a test for iron in the water, too, to get the exact concentration you have in your water.

How Much Does It Cost to Test Water for Manganese and Iron?

Water testing prices vary by state and the prices tend to go higher with more compounds and contaminants to test for. However, you can save a considerable amount when you have your water tested in a public laboratory.

In South Dakota, for example, the public laboratory only charges $14 for a manganese test. Alternatively, you can buy a simple test kit that costs $10 to $30. Bigger test kits cost more.

Ways to Treat Manganese and Iron in Water

There is hardly any procedure to treat manganese and iron in the water that gives permanent results except reverse osmosis. Although a guaranteed process, there are some considerations when you choose this procedure. First, you should know that this is an expensive option.

Before we finish this article, we want to address related and common questions around this subject.

What is the Black Mold in a Shower?

The black mold in the shower is, in most cases, not really mold, just manganese. The black color indicates the presence of oxidized manganese and the bacteria that eat away at it. Bacteria that thrive in oxidized iron also produce a greyish color sometimes, but usually red, brown, or orange.

The black stain on shower tiles is also caused by manganese- and iron-related bacteria. They borrow electrons from these oxidized minerals and produce a black color as the reaction from the process.

Allen Michael is the Founder and Editor of Home Viable, a website that he started to provide readers with tips on home efficiency and automation. He draws on his engineering background combined with his family-of-four experiences for his articles.

HomeViable.com is a participant in the Amazon Services LLC Associates Program, an affiliate advertising program designed to provide a means for sites to earn advertising fees by advertising and linking to Amazon.com.